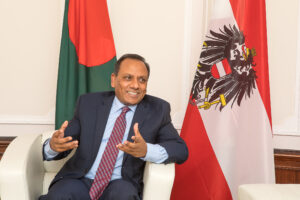 SOCIETY spoke with the new accredited Ambassador of Bangladesh, H.E. Muhammad Abdul Muhith, about the country’s challenges and its projects and innovations to overcome them.

The linear distance between Vienna and Dhaka is almost 7.000 km. Despite this geographical remoteness, what connects the two countries and what are your goals for your term to further strengthen these ties? 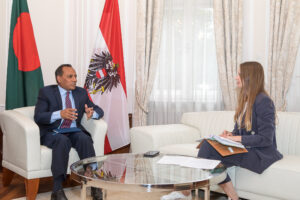 In the times of globalization, distance isn’t a problem anymore. Despite those thousands of kilometers, Europe was never far away from Bangladesh. Although, Austria wasn’t within our reach for a long time because we only established our Embassy here six years ago. Afterwards, we immediately became close cooperation partners.

Austria is a very important partner for Bangladesh for a couple of reasons. First of all, Austria is a significant country in Central Europe as well an important member of the European Union. Secondly, Vienna hosts a large number of international organizations including the UN Offices. There is, for example, the International Atomic Energy Agency (IAEA) which is important for Bangladesh as we entered the Nuclear Energy Age. Furthermore, the United Nations Industrial Development Organization (UNIDO) and the United Nations Office on Drugs and Crime (UNODC) are headquartered in Vienna. These are important UN agencies for us. A third reason is the advantage of Austria’s geographical location. From here, we are diplomatically representing three more countries: Hungary, Slovakia and Slovenia. Therefore, we need to have a deeper engagement with Austria. My primary goal is to further the existing bilateral relationship between our two nations. The strengthening of bilateral partnerships also represents the promotion of multilateralism which has never been as important as it is now. We can see a lot of changes in international relations as we are facing globally challenges like the climate change and the Covid-19 Pandemic. These are global problems which need global solutions.

How many Bangladeshis live here in Austria and how are they being represented here on the cultural level? 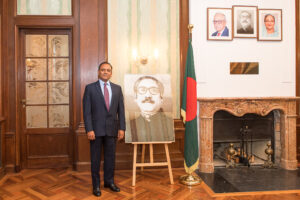 As there hasn’t been a Bangladeshi Embassy in Vienna for a long time, it was difficult to establish cultural institutions with the objective to facilitate the exchange between the rich cultural heritages of the two countries. But after the establishment of our diplomatic mission, we have been very fortunate. In 2019, we organized a cultural event at the Lichtenstein Palais where a cultural troupe from Bangladesh presented traditional instruments and performances. Due to the positive feedback, we intend to organize more such events and to bring artists from both nations into closer contact.

Another area is sport: there is a Bangladeshi-Diaspora cricket team in Vienna. When I first learned about it, I was very surprised as cricket is not a popular sport in Austria. We sponsored a tournament this year to commemorate the Birth Centenary of the Father of the Nation Bangabandhu Sheikh Mujibur Rahman, and afterwards we were convinced to support the community even more. Now, we are going to organize a tournament every year in order to promote cricket in Austria.

The Embassy itself also happens to be a meeting point for the members of the Bangladeshi community, especially on holidays, New Year’s Eve or on our National Day. We arrange a lot of programs in this Embassy and this gives the opportunity for the community to come together with their families.

What are the main challenges Bangladesh faces at the moment?

Bangladesh faces a lot of challenges regarding climate, economy and the COVID-19 pandemic. But good initiatives and ventures can emerge from difficulties. We say that resilience is our national character, which speaks of the positive energy of our nation. We have so many problems but still moving forward. Bangladesh experiences already the worst repercussions of climate change. However, we have many solutions in terms of food productions like floating vegetable beds, salinity- and drought-tolerant rice varieties. So, these are some innovations we have been able to achieve. Also, our economy grew in the last 12 years continuously above 6%. In 2019, we crossed the 8% mark. Furthermore, Bangladesh is on track to achieve the Sustainable Development Goals (SDGs). Our prime minister has two visions: to become first a middle-income economy by 2021 and then to become a developed country (high-income Country) by 2041.

Despite the pandemic, our economy has shown its resilience. Bangladesh strongly depends on export. We are a major supplier of RMG products to Austria and also to the whole Western Europe and North America. However, if the providers of raw materials cannot deliver their products and the stores in Austria are closed, this causes a huge damage in the supply chain. Anyway, the pandemic also brings some new opportunities. For instance, we can improve our business strategy. At the moment, we are puttinga lot of emphasis towards food security and Agribusiness industry. With this emphasis, we can export vegetables and fruits to Europe in the future.

Another important challenge to mention is that we are hosting the highest number of forcibly displaced people from Myanmar. Currently, there are 1.1 Million people from our neighboring country taking shelter in Bangladesh. In the 21st century, this is the biggest crisis of displacement and Bangladesh is the nation to host it. In the end, we will have to repatriate this population back to their country – where the problem originated, and where you will find the solution. So, we urge the global community to act more seriously with the goal that those people can return to their homeland in a safe, sustainable and dignified manner.